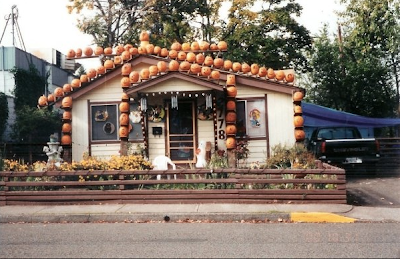 Before J-TEA occupied this house on Friendly Street, it was the Pumpkin House, owned by Cindy and Ron Rutledge. The Pumpkin House was a kind of neighborhood gathering with a large following. The Rutledges would provide hundreds of pumpkins and the tools to carve them with, and ask the entire neighborhood over to their house for carving.
From their stories recounting the events from years past, they evidently had to carve a lot of the pumpkins themselves and it was always a push for them to get it done. Apparently, and I'm name dropping here, but Toshi from Toshi's Ramen was an integral part of the carving team.

The carvers, armed with knives and spoons, surrounded themselves with pumpkins and had to carve themselves out as if escaping from a scene in the Walking Dead, but pumpkin guts flying instead of brains.
The pumpkins needed scaffolding to hold their growing numbers and cars would come full of curious onlookers to see the impressive collection of jack 'o lanterns.


We tried for a bit to resurrect the pumpkin tradition, until a couple years ago when I had the chance to ask Cindy how they did it. Essentially, she said, it was a whole lot of work. Unfortunately I've already signed myself up for too much of that so I let that one go. But what we did do is offer some great Halloween themed teas and we will be serving them again this year. Mummy's Dust Puer, B+ Hibiscus for Vampires, and Ghost's Cry Wooooo-long. Rumour has it, we will have French style hot chocolate infused with tea rather than water...a Dia de los Muertos Chocolate Fest.
Posted by Unknown at 11:37 AM No comments:

Disclaimer: in no way does J-TEA condone drinking in excess. When drinking beer or tea, know when you've had enough.

We've got to hand it to our friends at 16 Tons for creating this unique and exciting event, the Tea Beer Fest. Kudos to 16 Tons founder and visionary, Mike Coplin.
I wonder if Mike knew that he'd soon be opening a cafe, or if it was just a prophetic move created as the 2011 first anniversary beer for the opening of 16 Tons tap house, the synergistic movement that came to be known as “Fredric's Lost Arm,” aka “The Lost Arm,” and known affectionately by me as “The Tea Beer,” a Belgian style Farmhouse Saison infused with Four Seasons Green Oolong tea from Ming Jian, Taiwan.
For those of you who were lucky enough to try "The Lost Arm,” a collaboration between 16 Tons, Oakshire, and J-TEA, I don't need to tell you that it was the ultimate tea infused beer. That stuff was great.

I like beer, so I was super excited to hear that Oakshire was doing the teabeer again... One of the best beers of all time, I think this one will go fast. I am looking forward to reuniting with this beer. It is like my long lost best friend and for that reason, I like the name “The Lost Arm.”

One of the reasons this teabeer is awesome is because they are using an awesome oolong tea. As many already know, using high quality ingredients improves the quality of your food. Oakshire decided on the Green Spring/Green Oolong tea, the same green tea that is featured in many of Eugene's best restaurants and cafés.

How did Mike put it? “When this beer came out, Josh lost his mind for about 24 hours.” And that was pretty much the truth of it. When it came out, I sipped on that beer for what seemed to be about 36 hours straight. The euphoric l-theanine/alcohol ethereal bliss went on and on, which ultimately in retrospect didn't feel healthy and that's what hangovers are for.

This event promises to be amazing. Great guests, caffeine, L-theanine, beer, food writers, bloggers, tea-heads, beer geeks, U of O professors, UO students and alumni, Oregonians and those from out of state, food scientists, drink enthusiasts, fans of punk music, members of the Monkey Wrench Gang. A party, a Tea Party of Epic Proportions.

So, if you are reading this, and if you can get a ticket to Eugene, Oregon, come to 16 Tons on Wednesday the 23rd from 5-10 PM to try out a combination of two worlds, the Tea Beer.
Posted by Unknown at 3:38 PM 1 comment: